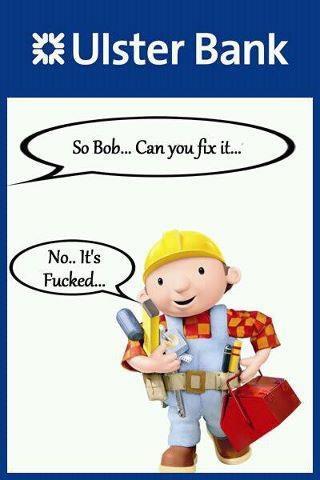 By Conn Ó Muíneacháin on December 3, 2013 in General
0
SHARES
ShareTweet

It’s a big day for online retail, and consequently for credit and debit cards, but millions of customers of RBS and its subsidiaries in Britain and Ireland, including Ulster Bank, found themselves unable to use their cards online or at ATMs yesterday.  The banks’ mobile apps and internet banking services were also inaccessible for a period between 6:30 and 9:30pm yesterday evening.

As with the group’s previous IT failures, customers vented their frustration online and Ulster Bank’s twitter account found itself apologising in the face of a torrent of Twitter criticism and complaint.

We would like to apologise to our customers. If anyone has been left out of pocket as a result of these problems, we will put this right.

RBS are reporting that the issues have been resolved, although reports persist this morning of customers having difficulties.

Bob the builder vs Ulster Bank

This latest incident comes in the wake of last year’s fiasco in which RBS took weeks to restore normal operations after their payments systems went down.  A similar incident to last night’s outage occurred in March.

After the 2012 disaster, RBS denied suggestions that their programme of outsourcing IT jobs to India was to blame.  But it’s hard to avoid the idea that the banking group is happy to pay huge salaries and bonuses to executives who have only the dimmest understanding of the risks created by the loss of experienced programmers and engineers.

The response to the 2012 disaster appears to be to invest heavily in new hardware and software, but is that being matched by an investment in staff and expertise?

Recent experience would suggest that this story isn’t over yet.