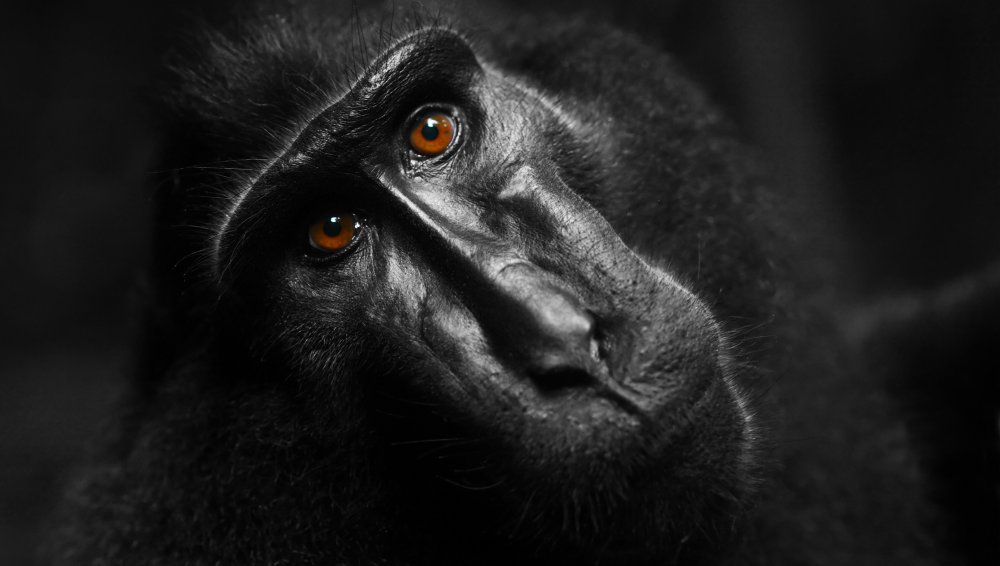 Out of respect for David Slater’s copyright, we are not using his photo. This is a stock image of a celebes crested macaque.

If a monkey picks up your camera and takes a selfie: who owns the copyright?

Well, clearly not the monkey. Everyone agrees that a monkey is not a person under the law, and cannot ‘own’ property – intellectual or otherwise.

Many would agree with photographer David Slater, who travelled to the habitat of the Crested Black Macaque in Indonesia on an expedition to photograph the monkeys, that he owns the copyright, even if a monkey pressed the button.

But volunteer editors at Wikimedia disagree. They’ve refused David’s request to take down the picture, arguing that since he didn’t take the picture, he cannot be the owner, and that therefore, the picture is in the public domain.

At first glance it looks like the law is an ass in this case (or perhaps a monkey?) But it’s worth remembering that many of those who are expressing opinions on the legalities of this situation are not necessarily qualified to do so. So I sent an email to media lawyer, Andrea Martin, who replied:

To get the benefit of copyright protection, an artistic work (such as a photograph) must be created by ‘a qualified person’ under the Berne Copyright Convention, the international treaty that provides for a broadly unified copyright system of laws across the globe. To be a ‘qualifying person’ the creator of the copyright work must first be ‘a person’,  in the sense of being a ‘legal person’. The scope of who is a legal person can range from an individual to a limited liability company or public body, but it can’t include a monkey. A monkey can’t sue or be sued in its own name, or own and dispose of property in its own name and those are the standard ‘incidents of legal personality’.  So whoever owns the copyright, it’s not the monkey.

The next question is whether the photographer can claim the copyright. And this is where Wikimedia are coming from. They say no person owns the copyright so the image is in the public domain, meaning no copyright protection applies. I would have thought this is a major issue for wildlife photographers, whose skill lies in setting up the shots, in the right locations, at the right times. And many wildlife images may be ‘triggered’ by an act other than the photographer pressing the ‘record’ button or clicking the shutter – it could be a trip wire, it could be a light activated beam; in this case it was an inquisitive monkey grabbing the camera and playing with it.

David Slater makes an important point when he says that the courts, not Wikipedia, has the right to adjudicate on copyright. Andrea Martin explains that, under Irish law for example, the presumption favours the person who is claiming the copyright, and it would be up to Wikipedia to establish, first, that copyright did not exist or, failing that, that Slater was not the owner.

A monkey can press a button, but it cannot make a photograph. Should we deny showjumpers recognition because a horse does the heavy lifting? I’m sure the Wikipedia editors think they are very clever, but the consequence of their pedantics is to deny David Slater the right to profit from his work as a wildlife photographer. It doesn’t serve the interests of copyright reformists or the Wikipedia community. It does serve as a discouragement to innovation by photographers and content creators, contrary to the spirit, if not the letter, of the law.

Very clever Wikipedia. Very funny. Now give it back.