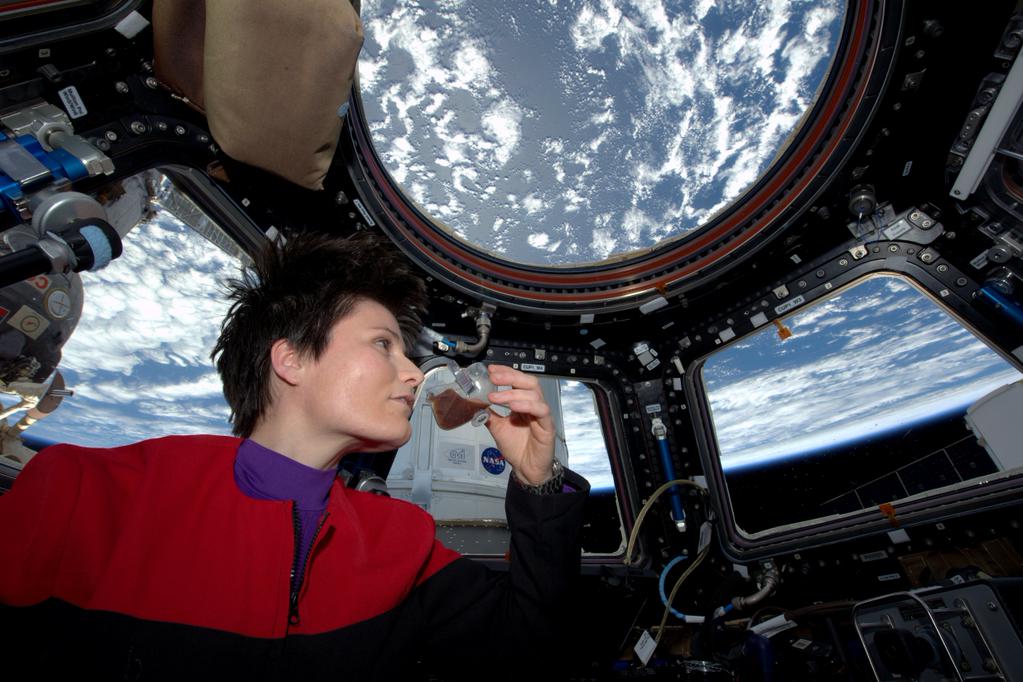 Of course there’s a lot to do on board the International Space Station, but for an Italian astronaut, good coffee has to be a priority!

So Samantha Cristoforetti became the first person to brew and drink an authentic espresso in space, and in doing so she paid tribute to a fictional female space pioneer who never allowed battling the Borg in the Delta Quadrant to get in the way of her favourite brew.

“Coffee: the finest organic suspension ever devised. It’s got me through the worst of the last three years. I beat the Borg with it.”

For Captain Picard, it was always “Tea – Earl Grey – hot!”, but for Kathryn Janeway*, it was coffee – lots of coffee! And so Flight Engineer Cristoforetti wore a version of Captain Janeways tunic as she tweeted the results of her percolation endeavours.

As with just about anything in Zero-G, making coffee is not a trivial task, so the Italian Space Agency sponsored the development the ISSPresso project to invent a machine to do it. Other researchers saw the opportunity to design a Zero-G cup, and help study fluid mechanics in Zero-G.

The results will confirm and direct math models that help engineers exploit capillary fluid physics (capillary fluidics) to control how liquids move by designing containers specific to the task at hand.

So you see, there’s serious science at work here. It would appear that pretty much anything you can think of which might make life more comfortable for people aboard ISS will naturally involve boundary-breaking research, with lots of potential for applications on earth and in space.

Defeating the Borg might take a little more research however.

*Technology.ie rates Kathryn Janeway as the best Star Trek captain – ever. So there!

Technology.ie is brought to you by Blacknight, Ireland’s premier provider of web hosting and domain names. Coffee.space and espresso.space are premium domain names; you should contact our sales team if you’d like to discuss registering either of them. But Ms Cristoforetti could register samanthacristoforetti.space for just €9.99!

Check out our domain name search tool with over 300 extensions (warning – it may become addictive!)