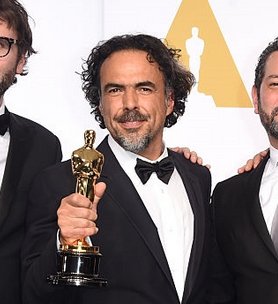 News of last night’s Oscars are all over the social media feeds this morning. Birdman directed by Alejandro Gonzalez Inarritu was one of the big successes, winning Best Picture, Best Director, and Best Original Screenplay (which was co-written by Inarritu). Julianne Moore got Best Actress for Still Alice and Eddie Redmayne got Best Actor for playing Stephen Hawking in The Theory of Everything. JK Simmons got Best Supporting Actor for his part in Whiplash, while Patricia Arquette used her platform as Best Supporting Actress to call for equal pay for women.

Arquette’s Oscar was the only winner for critic’s favourite Boyhood.

Song of the Sea by Irish animators Cartoon Saloon lost out in the Best Animated Feature category to Disney’s Big Hero 6. Cartoon Saloon had curated the @Ireland Twitter account over the past week, giving a unique insight into the Oscars from a nominee’s perspective.

Of course there’s much more to the Oscars than the headline awards, and the stories will continue to percolate over the coming hours: the red carpet, the gowns, Neil Patrick Harris. Irish viewers can watch the show tonight at 9pm on RTÉ2.

But if I were to pick one thing that stands out in the chatter this morning, it’s this magnificent performance of songs from The Sound of Music by Lady Gaga. Julie Andrews liked it too!