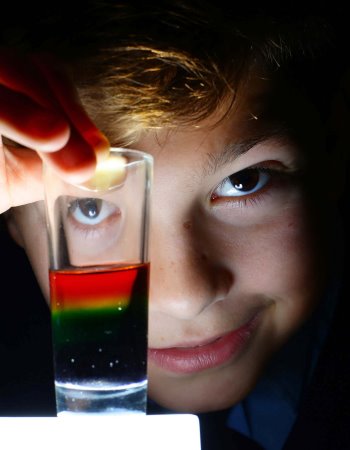 By Conn Ó Muíneacháin on January 18, 2016 in Events
0
SHARES
ShareTweet

Constantine Melega from St.Mary’s Boys National School in Maynooth pictured with their project Rainbow Tube at the Intel Mini Scientist Regional Final in Leixlip. This year more than 5,500 students from 110 different schools across Ireland took part in the competition Pic: Marc O’Sullivan

On Friday January 22nd the National Grand Final of the Intel Mini Scientist will take place in the Science Gallery in Dublin. For the past number of months almost 6,000 students from across Ireland have been taking place in the Mini Scientist competition and the Grand Final will see the top 22 projects compete for the overall title prize.

The Intel Mini Scientist Exhibition is a competition for Primary school students across Ireland in which they develop science related projects which are then exhibited at fairs held within their own schools. Intel employee volunteers visit the participating schools to judge the projects and then select winning projects at each school who go forward to take part in the take part in the Mini Scientist Regional Finals.

The competition is open to 4th, 5th and 6th class students, and supports the Primary Science curriculum. It aims to encourage enthusiasm and practical learning in the area of science.

This year 105 schools took part in the program from 14 different counties with almost 6,000 students taking part. The school exhibitions took place during October and November with projects being selected to go forward to the 4 regional finals which took place in Shannon, Cork and in Leixlip in December.

At each regional final a number of projects were selected to go forward to the Grand Final event.

The Grand final will bring together the top 22 projects from the overall competition who will exhibit their projects for a number of judges on January 22nd at the Science Gallery. The exhibition begins at 09.45 and the awards ceremony will take place at 13.00.

The following projects are participating in the Grand Final: