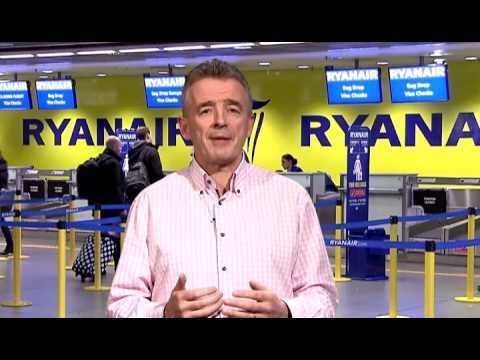 Ryanair’s commitment to social media continues as their new head of marketing took to Twitter yesterday for the latest in their weekly series of #AskRyanair sessions.

Meanwhile, Michael O’Leary showed up on their new TV ad, produced by TV3 and broadcast during Wednesday’s episode of Coronation Street.

Traditionally Ryanair has rejected expensive TV advertising in favour of cheaper methods.  The new video seems strangely awkward – less like an ad, more like a Party Political Broadcast, with Cuddly Uncle Michael telling us there’s a lot done, more to do!

Yesterday’s Twitter chat reiterated many of the points made in the video.  Marketing chief Peter Bellew talked about the new website and app, saying that the test version is “breathtaking”, and responded in typical Ryanair cheeky style to a request for flights to China:

@2tall2beajockey Our current planes & 175 new ones can’t stretch that far. We can fly you to Chinatown in London from €16.99 #AskRyanair

On the question of Portable Electronic Devices:

@bryanmcg Looking at it Bryan, not as simple as it seems, follow @Ryanair for latest update on PEDs #AskRyanair