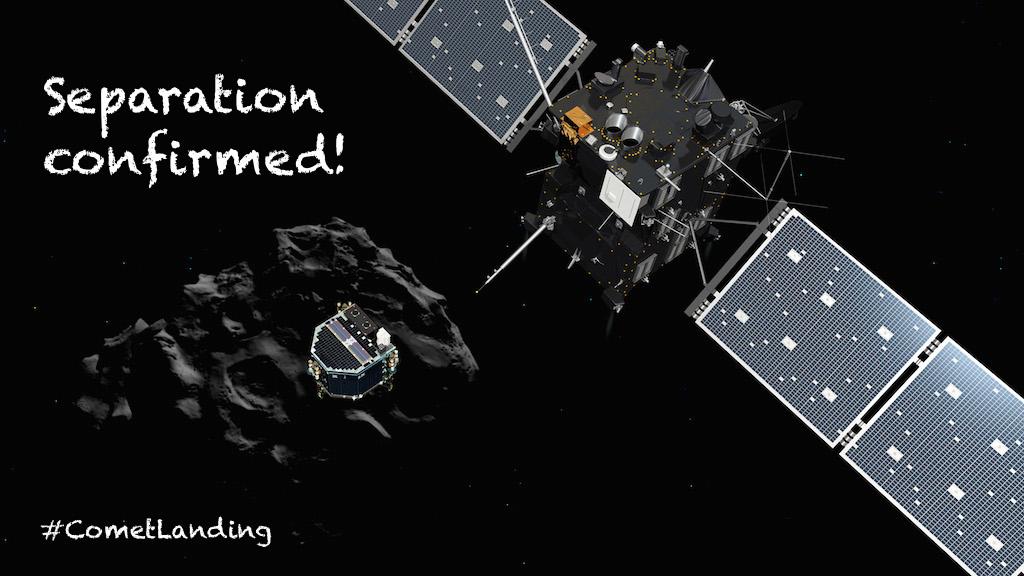 By Conn Ó Muíneacháin on November 12, 2014 in Video
0
SHARES
ShareTweet

We’ve talked about Rosetta before. The European Space Agency’s mission to Comet 67P/Churyumov-Gerasimenko took 10 years to catch up with the comet, which is about the size of a city, and which we now know is shaped like a rubber duck!

It’s also a rough uneven surface, with gravity 100,000 times less than Earth’s. Landing on it would be like … well, like nothing on earth!

But landing on the comet has always been part of the plan, and around 08:35 this morning, the Rosetta probe launched the Philae lander, a machine about the size of a washing machine, towards the comet.

Rosetta has been orbiting the comet for almost 100 days, taking photographs, gathering data and choosing a landing site. Now Philae, is on its way travelling at about 1 metre per second, on a 30km descent towards the comet. It’s going to take about 7 hours.

Latest reports from ESA indicate that telemetry is being received from Philae on its descent and touchdown is expected at 16:02 UTC.

Touchdown will be the tricky part. With such low gravity, there’s a real danger that the lander could simply bounce off the comet. The craft will use screws and harpoons to attempt to anchor itself to the surface. There’s also a gas thruster which will push down on the craft, to counter the reaction from the harpoon firing, however telemetry from the lander has indicated that the thruster may not be working.

At a distance of 800 million kilometres from Earth, it takes 28 minutes for radio signals from Rosetta to reach us. It will be an anxious wait!

You can follow both Rosetta and Philae (the landing craft) on Twitter; the official hashtag is: #CometLanding.