It’s the social media equivalent of bumping into someone as a pretext to asking them on a date.  (Does anyone actually do that?  In movies maybe? OK, forget it.)

Yesterday Twitter sent emails to several (not all) Twitter users inviting them to try Twitter’s advertising platform which has been extended to all “small and medium business” in Ireland, UK and Canada.  We talked about it on the podcast yesterday and Michele has been experimenting with promoted tweets in the last few days.

So, when I got an email from Twitter yesterday afternoon inviting me to #TwitterAds101, where I’d get a series of mails over several weeks with step-by-step instructions on how to advertise on Twitter, I thought: Great! Let’s see what this is about!

This came this morning: 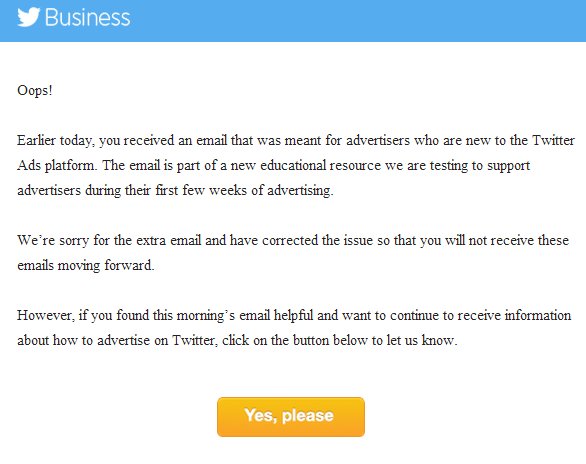 Again, it’s fair enough! And now that I work full-time for Blacknight, I don’t have any projects of my own to advertise on Twitter.  But I’m still interested, so I clicked Yes.

But I’m curious, how did they decide who to send it to in the first place?  And how many of those did they subsequently send an apology to?  Did you get one, and if you did, did you welcome it or not?  Leave a comment!