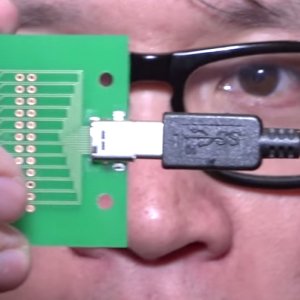 By Conn Ó Muíneacháin on January 15, 2015 in Video
15
SHARES
ShareTweet

OK – the reaction of the two guys in this video may seem a little over the top but, in fairness, they’ve just seen the future!

For many of those present, CES was their first chance to lay hands on the new USB Type-C connector, which is expected to be supported by device manufacturers beginning this year. And for anyone who has ever fumbled in the dark with a phone charger, or tried to a feel a USB Type-A plug into position at the back of a PC, Type-C comes with one simple innovation: it doesn’t matter which way you plug it in!

The introduction of USB in the 1990s soon led to the observation of a corollary on Murphy’s Law, which has held ever since:

A USB connector must be turned over at least once before you figure out the correct way to connect it.

iPhone and iPad users have long enjoyed the convenience of reversible connectors: Apple introduced its reversible ‘Lightning’ connector with the iPhone 5 in 2012. Now it is rumoured that USB Type-C will be a key feature of MacBooks in 2015.

Type-C USB connectors will support the new USB 3.1 standard, which promises to be twice as fast and carry more power than USB 3.0. It will also support two-way power transfer.