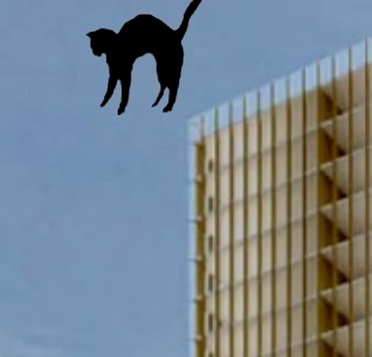 By Conn Ó Muíneacháin on April 24, 2015 in Humour
19
SHARES
ShareTweet

So cats always land on their feet? Well – maybe they do – but that’s not what saves them from death.

It turns out that feline aerodynamics are such that a cat’s ‘terminal velocity’ – the constant speed it reaches when acceleration due to gravity is equal and opposite to the drag caused by air resistance – is generally not lethal. In fact, it turns out that cats can survive 90% of falls which would kill a human. And the higher the fall – the more likely the cat is to survive.

Now, imagine a universe where folk wisdom is true about cats landing on their feet – and Murphy’s law always holds in relation to buttered toast. That raises an interesting possibility for a perpetual motion machine: an irresistible force / immovable object kind of paradox!

Technology.ie is brought to you by Blacknight, Ireland’s leading hosting company and ICANN-accredited domain registrar. The domain name buttered.cat is available to register, subject to certain linguistic and cultural conditions – or what about buttercat.science, on special offer for €2.55?