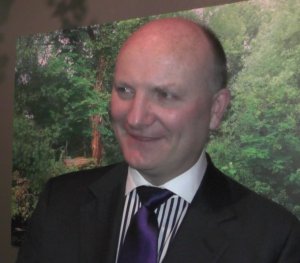 A Capital Gains Tax rate of 33% is a tax on risk, and operates as a disincentive to entrepreneurship in Ireland, which amounts to “economic illiteracy”.  That’s the view of Galway based entrepreneur and campaigner Declan Ganley, which he expressed recently in an opinion piece in The Sunday Business Post.

A few days later, Technology.ie met Declan at the latest Startup Galway event where he was the guest speaker.  He says he’s not getting into politics again, but he is advocating for reform of CGT on business and economic development grounds.  He also talked about Galway’s potential as a startup hub, and the need for entrepreneurs to embrace “the freedom to fail”, learn from their mistakes and re-apply their experience.

Over 100 people packed into an upstairs room in McSwiggan’s bar and restaurant, to listen to one of Galway’s most successful technology entrepreneurs. Declan Ganley founded Rivada Networks in 2004, and serves as both CEO and Chairman of the company. Rivada Networks is a leading designer, integrator and operator of wireless, interoperable public safety communications networks for state and local government customers. He is also the patented co-inventor of Dynamic Spectrum Arbitrage technology. Declan has built a number of businesses in the telecommunications and natural resources sector including Broadnet, which rolled out wireless networks in ten European countries. He rolled out a cable TV network, Cabletel, in Eastern Europe, and from 1991 to 1997 he built what became the largest private forestry company in the former Soviet Union.

This was the third event held under the banner of Startup Galway, an emerging initiative to build an entrepreneurial ecosystem in Galway, focused on the tech (software/Internet) and biotech sectors.