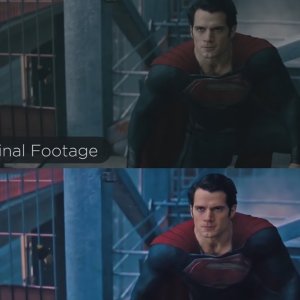 The success of dark-themed and dark-toned Batman films had an influence on the last Superman movie, it appears. Just how much of an influence becomes obvious when you see Man of Steel corrected to give it a brighter look. It would appear that the darker look was a decision taken in post-production, as the brightened images seem to correspond more closely with photos taken on set during filming.

Meanwhile, CBS has released a first look trailer for its new Supergirl TV series! I like it – not least because of Calista Flockhart’s entertaining performance as the heroine’s boss! There are lots of knowing nods to superhero tropes and clichés (the cape is for aerodynamics – and it’s not an ‘S’!), and Melissa Benoist as Kara/Supergirl handles the whole “coming-out-as-a-superhero” thing rather well, I think.  Update: it turns out the whole first episode has been leaked – in HD!

Technology.ie is brought to you by Blacknight. Not ‘The Black Knight‘.