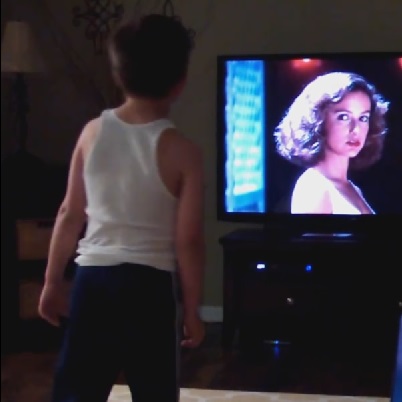 I love Dirty Dancing. Cut out all the music and dancing and it doesn’t work as a movie. Cut everything else out and you’ve pared it down to its elements. On a basic, primal level it’s all about the moves, the body language, the awkward kid carrying a watermelon, transformed into the graceful and beautiful dancer in the spotlight.

And at the heart of it all is Johnny Castle: Patrick Swayze in his first big role – and probably his best.

That’s why I love this video. Here’s an eight year old boy, too young to grasp the themes of the film, but he’s knows instinctively what’s so inspiring about Johnny, and his response is totally natural – and cool!

738,000 views on YouTube is very respectable, but it’s already topped 12 million where it was originally posted on Facebook.