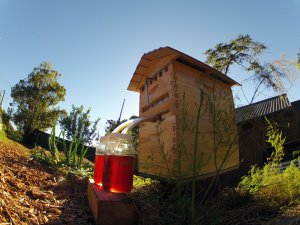 By Conn Ó Muíneacháin on April 17, 2015 in Video
0
SHARES
ShareTweet

An Australian father and son team has exceeded their crowdfunding target 150 times over, raising over 11 million US dollars (and counting) for their revolutionary new beehive design that promises ‘honey-on-tap’.

Current beekeeping methods involve hours of work in removing frames of honeycomb from a hive, removing the wax cap from the top of the comb and using a centrifuge to spin the honey out of the cells. The Flow Hive allows a beekeeper to harvest honey without opening the hive and with minimal disturbance to the bees, simply by turning a tap and collecting the honey which drains from the hive.

The video includes some enthusiastic testimonials from beekeepers, however others have warned that simplifying the harvesting process could lead to a kind of “Christmas Puppy Syndrome”, by encouraging naive untrained beekeepers.

The Andersons say that they do not mean to underplay the commitment necessary to keep bees, and they recommend that users should join local beekeeping clubs to educate themselves.

A cheeky (and slightly sexist) old Irish proverb includes “the work of bees” among three things which Aristotle could not explain, but the truth is that beekeeping is an ancient and fascinating craft which was probably well understood in ancient times. One reason for the Andersons’ crowdfunding success might be their well-produced videos which, in addition to their clever technology, shows a real understanding and appreciation of bees. In addition to transforming the work of honey harvesting, the Flow system also provides a window at the end of each frame, which allows a view on the bees as they go about the work of making honey and raising their young.

Check out the Flowhive YouTube channel for more, or visit their Indiegogo page to order your own FlowHive system. But you’d better bee quick 🙂 – the campaign closes in a couple of days.