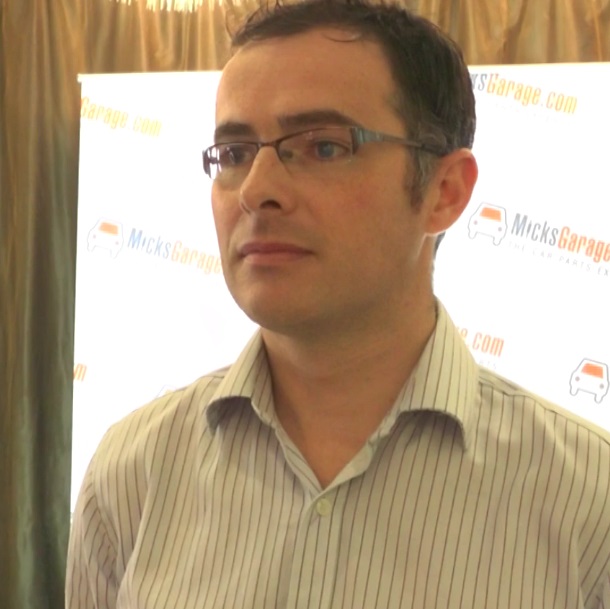 “I suppose it’s one of the myths that people have sometimes in terms of ecommerce businesses, that you can just set up a website and off you go; and you can go away on your holidays and everything else. It doesn’t happen that way … it’s all about hard work, all the way”

Michael Crean is founder and CTO of MicksGarage.com, and he makes the point that it took them 10 years of hard work to become “an overnight success”.

MicksGarage.com were one of the participants in the first Ecommerce Expo Ireland, held last week in Dublin. Filling us in on the last 10 years, Michael explained how a background in the auto-parts industry and an interest in ecommerce led him to start the business in 2004. A disruptive force in the market, he discovered that manufacturers wouldn’t deal directly with them at first, but that has changed now, he says. Now they list 5.2 million parts on MicksGarage.com, selling to 70 countries on a monthly basis and employ 42 people.

“We’ve grown about 40% year on year, and this year looks fairly spectacular”

His advice to ecommerce entrepreneurs is to be realistic about the hard work required, but he says

“If you have a love for it, and a willingness to work hard, it will succeed”

In Michael’s case, he discovered that he loves technology and IT. “From an IT point of view you can do absolutely anything” he says. Mick’s Garage has developed a complete ecommerce platform which, he says, can be applied to a range of markets.

Technology.ie is brought to you by Blacknight, now offering names in hundreds of new generic Top Level Domains and a range of quality hosting options. We’ve got more on the way from Ecommerce Expo Ireland in the coming days.