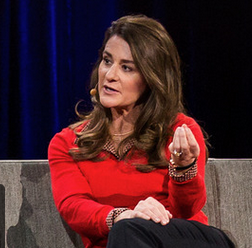 By Conn Ó Muíneacháin on April 7, 2014 in Video
1
SHARES
ShareTweet

Earlier this year Bill Gates posted his annual letter from the Gates Foundation, with some very encouraging data on the impact of philanthropy and development aid on poverty and quality of life.  Last month, he and his wife Melinda took part in an interview with Chris Anderson on stage at TED.  They talked about the reasons for setting up the foundation which will give away 95% of their wealth, the successes and failures, how they choose what to work on, how they are raising their children with a sense of responsibility, and the role of philanthropy in the world.

Talking about child mortality, Gates says that humanity is “making incredibile progress”, especially in the last 10 years.  He wants to make challenge the myth that aid doesn’t work.  The data tells a different story.

Warren Buffet has pledged to give away his fortune through the Gates foundation, effectively doubling the resources at their disposal. The Gates’s also talk about encouraging others to do the same. Their message: it feels good, and you can’t take it with you!

What if the Moon was a Disco Ball – No, Seriously! [Video]
EU Top Court Overturns Data Retention Directive