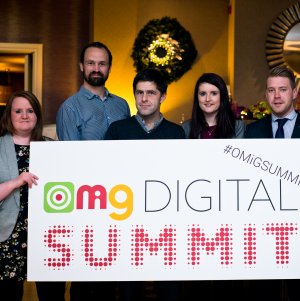 By Conn Ó Muíneacháin on January 14, 2015 in Video
4
SHARES
ShareTweet

Tickets are going fast for Galway’s first Digital Summit to be held at the Ardilaun Hotel at 6:30pm on January 29.

The event has grown out of the monthly gatherings of OMiG – Online Marketing in Galway, founded by Maricka Burke-Keogh.

Blacknight is the Gold Sponsor for the Digital Summit, and Technology.ie attended the launch recently in Galway.

The Digital Summit is designed to share the same volunteer ethos as the monthly events, so tickets cost just a nominal €7.50. Exhibitor tickets are already sold out – but there’s a waiting list.

This week, two additional speakers have been confirmed for the event. They are: Lucy Campbell, Marketing Director of RTÉ Television and RTÉ Digital; and Emer Lawn, Director of Digital at the Mediaworks agency.

They’ll join Hugh Linehan of the Irish Times; Aidan Coughlan of Newstalk; Stephen O’Leary of Olytico; and Brian Harte of Tourism Ireland, as they take to the stage for a debate and evaluation of the digital future.

Technology.ie is the official Online Media Partner for the OMiG Digital Summit.