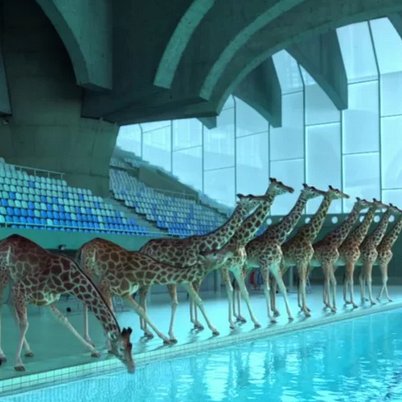 Giraffes are graceful, if slightly ridiculous creatures, loping across the savanna with their extraordinarily long limbs and necks. They can certainly make you think, about Darwinian evolution, and the relationship between an organism and their ecosystem.

But it takes an extraordinary imagination to conceive of giraffes in the way Nicolas Deveaux has done: in a surreal and unlikely spectacle involving a diving board and trapeze!

5 mètres 80 from Nicolas Deveaux on Vimeo.

It’s also a great showcase for his digital animation skills, because somehow, the native grace – and ridiculousness – of the giraffe is expertly depicted. The video has won prizes at film festivals around the world.

It’s the latest in Deveaux’s series of unlikely animations featuring animals, beginning about 10 years ago with a trampolining elephant!