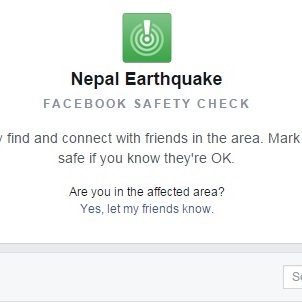 It’s meaningful to be in Tokyo to announce this because the great earthquake and tsunami a few years ago inspired us to build the first version of this for Japan. Now we’re glad to have this ready to serve everyone in the world.

Now Facebook Safety Check is playing a role in the aftermath of the earthquake in Nepal. The tool is activated in the wake of natural disasters and prompts users who may be in the affected area to use the social network to let friends and family know they are safe.

Facebook says that they “determine your location by looking at the city you have listed in your profile, your last location if you’ve opted in to the Nearby Friends product, and the city where you are using the internet”.

If you’re ever in a situation that would require you to use Safety Check, we hope it’s a tool that helps you stay connected to those you care about, and gives you the comfort of knowing your loved ones are safe.

The response from people involved in the Nepal disaster is reportedly positive.

I like this Safety Check feature of Facebook. Technology helps calm nerves down. Use it extensively. #earthquakeagain pic.twitter.com/MeTaezlvVy

Facebook Safety check is a comparatively recent tool compared to Google Person Finder which launched in 2010 after the Haiti Earthquake.